Tasmania’s west coast is a great place for a summer holiday. There is something here to please everyone, including walking trails, waterfalls, touring, history, taste experiences, fishing, bike riding and some great four-wheel driving.

There is a variety of terrain to four-wheel drive on, such as beaches, through rainforests, heathland and button grass plains.

We hopped on the ferry and joined a group for a tag-along tour of Tasmania’s west coast. They were a mixed group, mainly from New South Wales, well-known to each other and were ready for fun and adventure. And on this trip we had plenty of each.

Our west coast adventure began at Marawah from where we headed for the Arthur-Pieman Conservation Area and some of the best beach driving available in Australia. 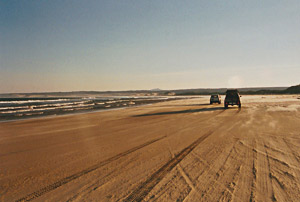 But the best beach driving in Australia is also the most hazardous, so only experienced four-wheel drivers, travelling in well-equipped four-wheel drives, in company with a couple of other vehicles, should attempt this drive.

The beaches of the west coast of Tasmania are subject to the sometimes wild seas of the Southern Ocean with nothing between here and Africa. There can be a build-up of driftwood, foam to disguise hazards such as rocks, and reshaping of the sand to cause unexpected drop-offs across the beach.

There is also quicksand caused by the runoff into the sea from perch lakes higher up the beach and at the rivers as they enter into the sea. Walk these river mouths to check how firm the sand is, wait for the wave to recede and drive on over, one vehicle at a time is best.

With care and preparation there is much to enjoy on this spectacular coastline. For more information and an excellent video go to Tasmania’s Parks and Wildlife here.

We were lucky and found the beach to be dry and an amazing adventure. The only hazard we encountered was a low drop off of approximately 15 cm that was undetectable as we headed down the beach. Everything in the back of our truck bounced high, but otherwise it was a most enjoyable drive.

From Sandy Cape we headed back towards Temma, then turned right onto the Balfour Track. This track is rated hard, due to the possibility of water covering a 70-metre canal-like stretch across the button grass plains. Under the water can be anything, including deep holes and rutted and slippery tracks.

As with using the Arthur-Pieman Conservation Area, permission is required from Parks and Wildlife available from the online Parks Shop.

Located not far from Zeehan, Montezuma Falls at 104 metres is one of Tasmania’s highest waterfalls. The track follows the historic route of the former North East Dundas Tramway. The tramway used to pass by the falls crossing the creek over a wooden trestle bridge.

The bridge is no more and neither is the tramway, but the remains of sleepers can be found in the track and in the fern-covered narrow cuttings through the rainforest of leatherwood, myrtle, sassafras and giant tree ferns.

The gauge of the tramway was only 2 feet which was quite narrow and chosen to suit the winding hillsides. Although flat, the track is slow to drive with care required through the narrow cuttings and windy nature of the track.

But the impressive Falls and swing bridge access, and the rainforest vegetation make this drive well worthwhile.

Saw Back Range Track to Adamsfield

The Saw Back Range track is accessed from the Gordon River Road through a locked gate. The key must be obtained from the Parks Tasmania office at Mt Field National Park.

People using this route must be experienced four-wheel drivers with high clearance vehicles. The track can be very tricky, especially when wet and there is a steep and slippery section to negotiate very carefully.

But again, this is a beautiful drive through changing vegetation that switches from rainforest to heath. The track is often fringed by ferns and magnificent beech trees found in the rainforest.

In 1925 Adamsfield was the site of mining activity for osmiridium, which had a value about seven times that of gold in those days. Today there is little left of this once booming town as fires and reclaiming bush have left their mark.

Our DVD Tasmania: the Devil’s Playground includes all these tracks and shows each adventure and the fun we had getting there.